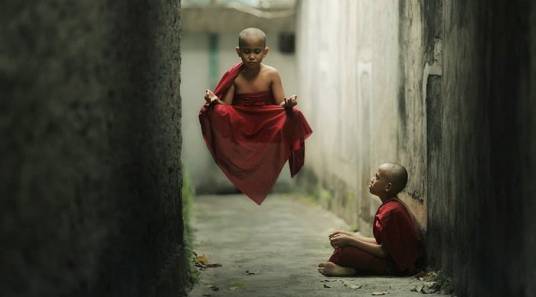 “Why should a living being not be able to obtain all the energy it needs for the performance of its life functions from the environment, instead of through consumption of food, and transforming, by a complicated process, the energy of chemical combinations into life-sustaining energy?” – Nikola Tesla

Several cultures across the globe such as Mayan, Egyptian, Aztec, Tibetian and Indian yoga, stress on the incredible benefits of sun gazing which includes powerful telepathy and sustaining oneself without food.

What Is Sun Gazing?

You may silently wonder why you should be staring at the ball of fire, burning your skin. Sun gazing is a practice that allows sunlight into your eyes at the lowest ultraviolet-index times of day – dawn and dusk. It must be done within the hour before sunset or after sunrise to protect your eyes from damage. One should always be barefoot while performing the sun gazing activity. Direct contact with the earth, be it sand, dirt or mud further intensifies the effects. As a beginner, you should only give 10 seconds and not more. Slowly and steadily you may increase 10 seconds in your gazing ritual.

‘Sun-eater’ Nikolai Dolgoruky from Ukraine has been practicing sun gazing for the past 12 years and has felt the impact of solar energy. Others gradually lost the need for food after nine months of sun gazing, approximately 44 minutes each day.

Also known as the HRM phenomenon, named after Hira Ratan Manek, the man who volunteered for scientific testing to confirm that he possesses the ‘super-human’ ability to go without food.

Since June 18th, 1995, HRM had and continued to live only on sun energy and water. Occasionally, for hospitality and social purposes, he drinks tea, coffee, and buttermilk. Until now, he had three strict fastings, during which he had just solar energy and only water and was under the control and observation of various science and medical teams.

The first of these fasting lasted for 211 days during 1995-96 in Calicut, India directed by Dr. C.K. Ramachandran, a medical expert on allopathy and ayurvedic medicine.

This was followed by a 411 day fast from 2000-2001 in Ahmedabad, India directed by an International team of 21 medical doctors and scientists led by Dr. Sudhir Shah (Dr. Shah’s synopsis report) and Dr. K. K. Shah, the acting President of Indian Medical Association at that time. Dr. Maurie D. Pressman, MD also describes his experience with HRM in an article he wrote and later joined the team for the next observation on HRM.

After the excitement of the findings at Ahmadabad, HRM was invited to Thomas Jefferson University and University of Pennsylvania in Philadelphia where he underwent a 130 day observation period. This Science/Medical Team wanted to observe and examine his retina, pineal gland, and brain, therefore this observation team was led by Dr. Andrew B. Newberg, a leading authority on the mind and also featured in the recent movie “What the Bleep Do We Know”, and by Dr. George C. Brenard, the foremost authority on the pineal gland.Â  Initial results found that the gray cells in HRM’s brain are regenerating.Â  700 photographs have been taken where the neurons were reported to be active and not dying. Furthermore, the pineal gland was expanding and not shrinking which is typically what happens after mid-fifties and, its maximum average size is about 6 x 6 mm, however for HRM, it has been measured to be at 8 x 11 mm.

What Happens To The Body During Sun Gazing?

The first three months of sun gazing allows the energy of the sun to move through the eyes and charge the hypothalamus tract. The hypothalamus tract is the pathway to the rear of the retina which leads to the brain, thereby activating it. The feeling will be calmness and relief from all the worries, that are generated by our daily food. Food acquires its energy from the sun, available to the sun-eaters without the complicated process of digestion. Hunger eventually ceases, but you may normally eat until appetite disappears naturally.

Sungazing also increases confidence level and boosts your problem-solving skills as you are devoid of unnecessary tension. The extreme negativity surrounding our lives will be shadowed by the positive attitude that we develop. Bad qualities like anger, fear, jealousy, lust – disappear giving way to ‘spiritual knowing’.

Six months of sun gazing has shown a remarkable change in the physical well being of the practitioner. Studies have suggested during this period, all the colors of the sun will have reached the brain. Color therapists associate this healing to the deficiency of color related to a disease, for example, the color green is associated with the liver, yellow with the heart. This is the reason why doctors suggest to eat a diet rich in a variety of colors. The body regains its wholeness. Prolonged practice boosts super-human abilities, apart from healing the mind and the body.

According to sun gazing experts, it is energy and not food that sustains us. After day eight months, the craving for the taste of food and its aroma dwindles, the brain too feels “charged up.”

Walking barefoot on the earth for 45 minutes per day for six days straight can cause a massive shift. This activates the pineal gland creating a sort of magnetic field in and around your body that recharges your body and brain too. Intellect and memory acquire a boost. The pineal gland has navigational and psychic capabilities like telepathy and the possibility of flight. Ever wanted to be in two places at once? Apparently, sun gazing helps such activities.

Are There Any Dangers?

Direct gazing at the sun can cause damage to the retina. During the first few weeks get your eyes checked. Abide by the rules and practice only during the mentioned time. No harm shall be done then.

Do not go to the absolute extremes without food, but include it in your daily practice as an additional method to increase your overall health and wellness.