If You Are Not Having Enough Sex, You Need To Read This! 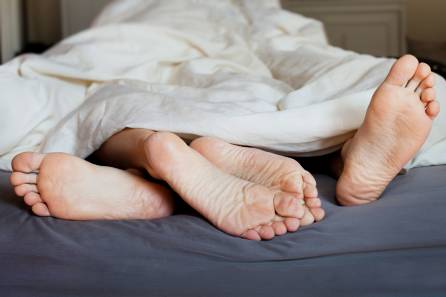 If You Are Not Having Enough Sex, You Need To Read This!

Love for sure is the oxygen of life which can happen to anyone, anywhere and at any time. With every passing year, it has proved to be the best antidepressant. The package deal of healthy relationship comes with giving you butterflies in your stomach along with having amazing sex with your partner. Having said that, some people do have a perception that sex is overrated in a relationship but there are many ways to prove them wrong because there are numerous reasons as to why sex is important with your spouse.

When you are painting the town red, while being insanely in love, it somehow gets to connect you both unlike any other. Furthermore, the dry spell in a relationship sucks because it directly leads to having no sex which can give your private part cob webs along with making it look like a tumbleweed. If you have experienced it too, then here is how it would have been.

The hormones that are released during sex acts like a strong wall in front of stress, which is why having a daily dose of hot and sexy time is useful for people who have high- stress jobs. But when it stops the body starts to take a lot of time to deal with normal stress levels. It has even been proved by facts and figures that people who recently had sex have low blood pressure in comparison to those who didn’t have it.

Ready to get sick oftentimes:

Having better immune system is a result of regular sex. It has been reported that regular sex leads to having higher levels of immunoglobin that in simpler words are knows to improve resistance to illness just like a common cold. So, if you want to get less sick, then have a strong immune system which can only be done by sex.

Your brains at times start to play with you when you want to have sex but not don’t feel like it. Sex at times is contagious so when you have it you will in return have a feeling of wanting more of it. This kind of a scenario can make abstinence a bit easier so keep your engines humming.

Arousal will get firm:

Both the gender face a tough time when they are unprivileged of having sex for a longer period. For men, they struggle with getting and staying whereas the women tend to struggle with arousal and lubrication after a long period of abstinence. Therefore, the body takes a whole lot of time to get to the normal self.

Strong cardiovascular health is linked to healthy sex. Having no sex eventually removes the hormonal and aerobatic boost from the heart and due to the amount of work that has been done on it suffers a lot. One of the ways of getting rid of the sexy frustration is to run on the treadmill that will help in making your heart healthier again.

All of this may or may not be true for you but the majority do feel that absence of sex can increase the amount of energy that you must earmark your mental functions. But per facts, it does increase your neurons growth and increase productivity. If you have experienced it then comment, like and share the best of luck with your sex life.