History's Biggest and Brightest Meteor Shower Is About to Happen and Here Is What You Need to Know About It! 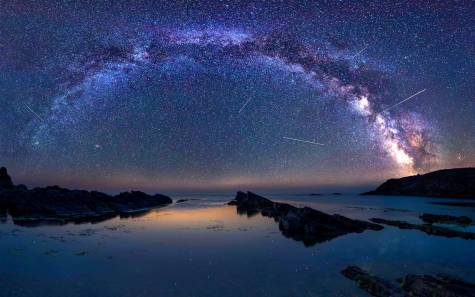 History’s Biggest and Brightest Meteor Shower Is About to Happen and Here Is What You Need to Know About It!

The Perseid meteor shower, one of the best shooting star displays of the year, is set to peak on August 12. It is expected to produce up to 150 meteors per hour and will be visible across the Northern Hemisphere.

The best time to watch the shower is late on August 12, or early the following morning. Stargazers hoping to watch the event should find an area away from light pollution and get settled in a comfortable position, allowing about half an hour for their eyes to acclimatize to the dark.

Alternatively, a live broadcast of the shower will be shown via the Slooh website on August 12 from 8 p.m. Eastern time. Astronomers will discuss the Perseids and answer questions about the meteor shower over the course of the evening.

Visit Slooh.com to snap and share your own photos from this live event, interact with the hosts and guests, and personally control Slooh’s telescopes (Courtesy of Slooh).

Meteor showers take place when Earth passes through a comet’s debris trail. The tiny particles that are shed from the comet hit Earth’s atmosphere and are vaporized, creating bright streaks across the sky.

The Perseids is one of the more prolific meteor showers of the year, sometimes producing up to 200 meteors per hour. It is associated with the Swift-Tuttle comet, which astronomers discovered in 1862. Records of the meteor shower date back almost 2,000 years.

In a blog post about this year’s Perseids, NASA’s Bill Cooke said that reports suggesting this week’s event will be the “brightest shower in recorded human history” are not true.

“This year, we are expecting enhanced rates of about 150 per hour or so, but the increased number will be cancelled out by the bright Moon, the light of which will wash out the fainter Perseids. A meteor every couple of minutes is good, and certainly worth going outside to look, but it is hardly the ‘brightest shower in human history.’”

He said the best meteor show of all time was the Leonids in 1833, when there were up to 100,000 meteors per hour. “During a good Perseid shower under ideal conditions, you can see about one meteor per minute. Now imagine yourself being back in 1833, on the night of November 12. Looking outside, you would see something like 20 to 30 meteors per second,” he wrote.

“Now, that’s a meteor shower. The 1833 storm had a profound effect on those that witnessed it; it also gave birth to modern meteor science. Those of us who study meteors dream of such a display happening sometime within our lifetimes. But it won’t be caused by this year’s Perseids.”