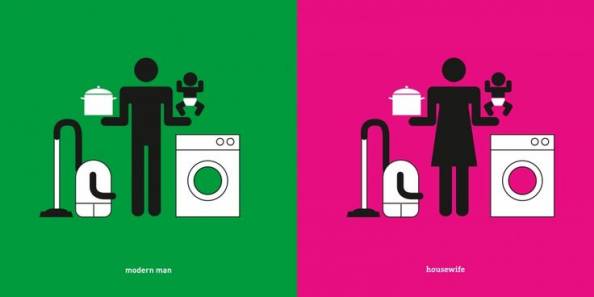 Do you categorize yourself as someone who believes in equal rights? Do you post statuses and preach about how gender roles should be diminished? Believe it or not, we say we promote gender equality, some of us even call ourselves feminists but the truth is hardly any of us implement it a 100% in our lives. Don’t believe me? Here are a few examples of double standards in our society that we’re all guilty of:

If a woman cries in public and/or displays her emotions in front of everyone, people will comfort her and tell her she’s strong for having the bravery to admit and cry in public. However, If a man does the same thing, the same people will tell him what a big coward he is and how unmanly it is to cry and show his feelings. And then you say men are heartless?

At a workplace, if a man tells his co-workers that they need to find another way to solve a particular problem, everyone will not only hear him out but also obey his command. Whereas, If a lady at the same workplace tells the same team that they need to stop beating around the bush and find a proper way to solve this problem, they will not only ignore her but also call her bossy just for doing her job. Cut her some slack, will ya!

If a girl eats one slice of pizza, everyone quietly understands that she’s trying to get fit. They respect that. But if a boy only eats one slice of pizza for whatever reason, he is made fun of and his masculinity is questioned. Suddenly, he isn’t a man because apparently, the number of slices you eat defines how macho you are?! Sure.

If a man is standing and talking to 5 women, he is considered to be a “chic magnet”. Everyone will start to praise him and what not. But if a woman is seen standing talking to 5 men, she’s a slut all of a sudden and she sleeps around. Way to go, using that bird brain of yours to judge me, loser.

A fat woman dating a regular lean guy is perfectly normal. Everyone starts empowering the girl and tells her she doesn’t need to change for some man. But if a fat guy is dating a regular woman, her friends will tell her she needs to move on and find someone better. Who gave you the right to judge somebody’s body, let alone their significant other?

If a man goes to the beach topless. He’s showing his nipples and hairy armpits, apparently that’s normal and acceptable. If a woman goes to the beach and she has one little barely-noticeable-blonde hair under her arms, she’s the dirtiest lady in the world and doesn’t take care of herself (showing her nipple is a completely different thing, she’ll probably get arrested by self-proclaimed internet warriors).

If a 23-year-old fit guy compliments a girl at work, she’ll feel at the top of the world and text all her girlfriends about it! But if a fat, nerdy looking guy compliments her, she’ll call Human Resources ASAP. Why do you ask? Because apparently, good looking fit guys can never be rapists but nerdy guys are automatically categorized as abusers.

Our society will never let anyone live in peace. Be it a guy or a girl – Thank God there’s no gender discrimination with torture. Either way, there’s injustice happening everywhere and it doesn’t stop at girls, boys are victims of it as well. Let’s stop doing to this each other, can we? It’d be a great relief for everyone!